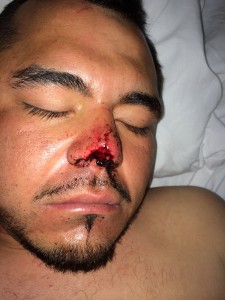 Eikenella corrodens is a fastidious Gram-negative facultative anaerobic bacillus. It was first identified by M. Eiken in 1958, who called it Bacteroides corrodens.

E. corrodens is a pleomorphic bacillus that sometimes appears coccobacillary and typically creates a depression (or “pit”) in the agar on which it is growing. It grows in aerobic and anaerobic conditions, but requires an atmosphere enhanced by 3–10% carbon dioxide. The colonies are small and greyish, they produce a greenish discoloration of the underlying agar, and smell faintly of bleach (hypochlorite). Only half produce the pitting of the agar considered characteristic. They are oxidase-positive, catalase-negative, urease-negative, and indole-negative, and reduce nitrate to nitrite.

Medical importance
E. corrodens is a commensal of the human mouth and upper respiratory tract. It is an unusual cause of infection and when it is cultured, it is most usually found mixed with other organisms. Infections most commonly occur in patients with cancers of the head and neck,[2] but it is also common in human bite infections, especially “reverse bite” or “fight bite”, or “clenched fist injuries”.[3] It also causes infections in insulin-dependent diabetics and intravenous drug users who lick their needles (“needle-licker’s osteomyelitis”).[4] It is one of the HACEK group of infections which are a cause of culture-negative endocarditis.

E. corrodens infections are typically indolent (the infection does not become clinically evident until a week or more after the injury). They also mimic anaerobic infection in being extremely foul-smelling.

Treatment
E. corrodens can be treated with penicillins, cephalosporins, or tetracyclines. It is innately resistant to macrolides (e.g., erythromycin), clindamycin, and metronidazole). It is susceptible to fluoroquinolones (e.g., ciprofloxacin) in vitro, but no clinical evidence is available to advocate their use in these infections.

In popular culture
E. corrodens is mentioned in The Tennis Partner, a memoir by Abraham Verghese.[5]

It is also mentioned in Episode 22, “Punch line” of the sixth season of the television docudrama, “Forensic Files.”