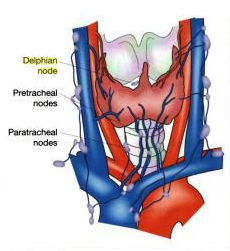 The Delphian (DL) node, also called the prelaryngeal or cricothyroid node, is a lymph node located on the fascia above the cricothyroid membrane. The DL node receives afferent lymphatic drainage from the larynx (supraglottis and subglottis via the anterior commissure) and the thyroid gland (upper and anterior portions of both lobes and isthmus). The DL node has two main efferent lymphatic drainage routes: one flows toward the pretracheal (sub-DL), mediastinal, supraclavicular nodes and the other to the paratracheal and lower jugular (Level IV) nodes (Fig. 1). The expression ‘Delphian’ was first used by R. Randall, at the time a medical student at Harvard, because a metastasis to the DL node may predict the prognostic outcome of laryngeal and thyroid cancers, in the same way the prophecy of Apollo at temple of Delphi foretold the future in ancient Greece.  The Oracle of Delphi in this case would make the dire prediction that death from Squamous Cell or Thyroid Cell carcinoma is pending.