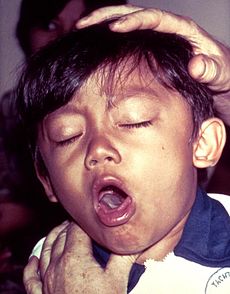 Pertussis, also known as whooping cough, is a highly contagious respiratory disease. It is caused by the bacterium Bordetella pertussis.

Pertussis is known for uncontrollable, violent coughing which often makes it hard to breathe. After fits of many coughs, someone with pertussis often needs to take deep breathes which result in a “whooping” sound. Pertussis most commonly affects infants and young children and can be fatal, especially in babies less than 1 year of age.  In adults it often manifests as the “100 days cough.”

The classic symptoms of pertussis are a paroxysmal cough, inspiratory whoop, and fainting and/or vomiting after coughing.[5] The cough from pertussis has been documented to cause subconjunctival hemorrhages, rib fractures, urinary incontinence, hernias, post-cough fainting, and vertebral artery dissection.[5] Violent coughing can cause the pleura to rupture, leading to a pneumothorax. If there is vomiting after a coughing spell or an inspiratory whooping sound on coughing, the likelihood almost doubles that the illness is pertussis. On the other hand, the absence of a paroxysmal cough or posttussive emesis makes it almost half as likely.[5]
The incubation period is typically seven to ten days with a range of four to 21 days and rarely may be as long as 42 days,[6] after which there are usually mild respiratory symptoms, mild coughing, sneezing, or runny nose. This is known as the catarrhal stage. After one to two weeks, the coughing classically develops into uncontrollable fits, each with five to ten forceful coughs, followed by a high-pitched “whoop” sound in younger children, or a gasping sound in older children, as the patient struggles to breathe in afterwards (paroxysmal stage).
Fits can occur on their own or can be triggered by yawning, stretching, laughing, eating or yelling; they usually occur in groups, with multiple episodes every hour around the clock. This stage usually lasts two to eight weeks, or sometimes longer. A gradual transition then occurs to the convalescent stage, which usually lasts one to two weeks. This stage is marked by a decrease in paroxysms of coughing, both in frequency and severity, and a cessation of vomiting. A tendency to produce the “whooping” sound after coughing may remain for a considerable period after the disease itself has cleared up.

The best way to protect against pertussis is immunization.  The immunization is primarily given as the DPT vaccine and is generally considered safe and cost effective.  Treatment with a macrolide or Bactrim is  first line.  Diagnosis is made with a nasopharyngeal swab cultured in Bordet-Gengou medium.