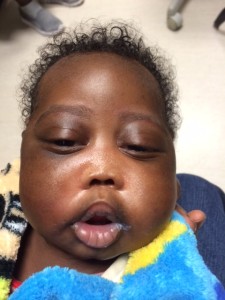 Holoprosencephaly (HPE, once known as arhinencephaly) is a cephalic disorder in which the prosencephalon (the forebrain of the embryo) fails to develop into two hemispheres. Normally, the forebrain is formed and the face begins to develop in the fifth and sixth weeks of human pregnancy. The condition also occurs in other species.

The condition can be mild or severe. According to the National Institute of Neurological Disorders and Stroke (NINDS), “in most cases of holoprosencephaly, the malformations are so severe that babies die before birth.”

When the embryo’s forebrain does not divide to form bilateral cerebral hemispheres (the left and right halves of the brain), it causes defects in the development of the face and in brain structure and function.

In less severe cases, babies are born with normal or near-normal brain development and facial deformities that may affect the eyes, nose, and upper lip.

Symptoms of holoprosencephaly range from mild (no facial/organ defects, anosmia, or only a single central incisor) to moderate to severe (cyclopia). 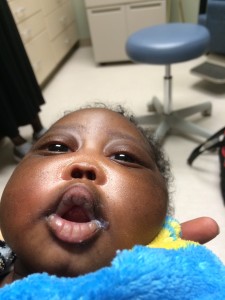 The most severe of the facial defects (or anomalies) is cyclopia, an abnormality characterized by the development of a single eye, located in the area normally occupied by the root of the nose, and a missing nose or a nose in the form of a proboscis (a tubular appendage) located above the eye. The condition is also referred to as cyclocephaly or synophthalmia, and is very rare.