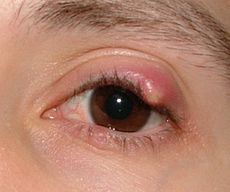 A chalazion (/kəˈleɪziən/; plural chalazia /kəˈleɪziə/), also known as a meibomian gland lipogranuloma, is a cyst in the eyelid that is caused by inflammation of a blocked meibomian gland, usually on the upper eyelid. Chalazia differ from styes (hordeola) in that they are subacute and usually painless nodules. They may become acutely inflamed, but unlike a stye, chalazia usually sit inside the lid rather than on the lid margin.