Actinomycosis occurs rarely in humans but rather frequently in cattle as a disease called lumpy jaw. This name refers to the large abscesses that grow on the head and neck of the infected animal. It can also affect swine, horses, and dogs, and less often wild animals and sheep.

The disease is characterised by the formation of painful abscesses in the mouth, lungs,[4][5] or gastrointestinal tract.[3] Actinomycosis abscesses grow larger as the disease progresses, often over months. In severe cases, they may penetrate the surrounding bone and muscle to the skin, where they break open and leak large amounts of pus, which often contains characteristic granules (sulphur granules). The purulent leakage via the sinus cavities contains “sulphur granules,” not actually sulphur-containing 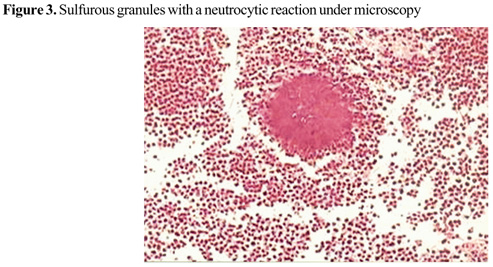 but resembling such particles. These granules contain progeny bacteria. Sometimes there is difficulty in making the correct diagnosis. In addition to microbiological examinations magnetic resonance imaging and immunological blood analyses may also be helpful.
Causes
Actinomycosis is primarily caused by any of several members of the bacterial genus Actinomyces. These bacteria are generally anaerobes.[7] In animals, they normally live in the small spaces between the teeth and gums, causing infection only when they can multiply freely in anoxic environments. An affected human often has recently had dental work, poor oral hygiene, periodontal disease, radiation therapy, or trauma (broken jaw) causing local tissue damage to the oral mucosa, all of which predispose the person to developing actinomycosis. They are also normal commensals in the caecum; thus, abdominal actinomycosis can occur following removal of the appendix. The three most common sites of infection are decayed teeth, the lungs, and the intestines. It is important to note that actinomycosis does not occur in isolation from other bacteria. This infection depends on other bacteria (gram positive, gram negative, and cocci) to aid in invasion of tissue.
Treatment
Actinomyces bacteria are generally sensitive to penicillin, which is frequently used to treat actinomycosis. In cases of penicillin allergy, doxycyclin is used. Sulfonamides such as sulfamethoxazole may be used as an alternative regimen at a total daily dosage of 2-4 grams. Response to therapy is slow and may take months.
Epidemiology
There is a greater disease incidence in males between the ages of 20 and 60 years than in females.[8] Before antibiotic treatments became available, the incidence in the Netherlands and Germany was 1 per 100,000 people/year. Incidence in the U.S. in the 1970s was 1 per 300,000 people/year, while in Germany in 1984, it was estimated to be 1 per 40,000 people/year.[8] The use of intrauterine devices (IUDs) has increased incidence of genitourinary actinomycosis in females. Incidence of oral actinomycosis, which is harder to diagnose, has increased.
History
In 1877, pathologist Otto Bollinger described the presence of Actinomyces bovis in cattle, and shortly afterwards, James Israel discovered Actinomyces israelii in humans. In 1890, Eugen Bostroem isolated the causative organism from a culture of grain, grasses, and soil. After Bostroem’s discovery there was a general misconception that actinomycosis was a mycosis that affected individuals who chewed grass or straw. Violinist Joseph Joachim died of actinomycosis in 15 August 1907.