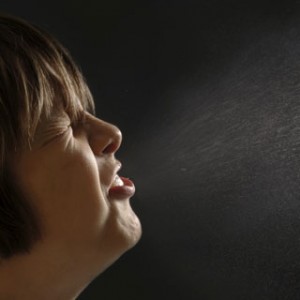 PHOTIC SNEEZE: Crossed nerve signals in the brain may be the reason some people sneeze when exposed to a sudden bright light.

Have you ever emerged from a matinee movie, squinted into the sudden burst of sunlight and sneezed uncontrollably? Up to a third of the population will answer this question with an emphatic “Yes!” (whereas nearly everyone else scratches their head in confusion). Sneezing as the result of being exposed to a bright light—known as the photic sneeze reflex—is a genetic quirk that is still unexplained by science, even though it has intrigued some of history’s greatest minds.

Some 2 ,000 years later, in the early 17th century, English philosopher Francis Bacon neatly refuted that idea by stepping into the sun with his eyes closed—the heat was still there, but the sneeze was not (a compact demonstration of the fledgling scientific method). Bacon’s best guess was that the sun’s light made the eyes water, and then that moisture (“braine humour,” literally) seeped into and irritated the nose.

Humours aside, Bacon’s moisture hypothesis seemed quite reasonable until our modern understanding of physiology made it clear that the sneeze happens too quickly after light exposure to be the result of the comparatively sluggish tear ducts. So neurology steps in: Most experts now agree that crossed wires in the brain are probably responsible for the photic sneeze reflex.

A sneeze is usually triggered by an irritation in the nose, which is sensed by the trigeminal nerve, a cranial nerve responsible for facial sensation and motor control. This nerve is in close proximity to the optic nerve, which senses, for example, a sudden flood of light entering the retina. As the optic nerve fires to signal the brain to constrict the pupils, the theory goes, some of the electrical signal is sensed by the trigeminal nerve and mistaken by the brain as an irritant in the nose. Hence, a sneeze.

But because this harmless (albeit potentially embarrassing) phenomenon doesn’t seem to be linked with any other medical condition, scientific study of the subject has been scarce. Research has done little more than document its existence and attempt to gauge its prevalence. No rigorous studies exist, but informal surveys peg 10 to 35 percent of the population as photic sneezers. A study in the 1960s showed that the trait is autosomal-dominant—the gene is neither on the X nor Y chromosome and only one copy of the gene has to be present for the trait to be expressed—so if one parent sneezes when they look at a bright light, about half of his or her children will, too.

The genetic culprit remains unidentified, but scientists are starting to take an interest in trying to find out. “I think it’s worth doing,” says Louis Ptácek, a neurologist at the University of California, San Francisco, and an investigator at the Howard Hughes Medical Institute. Ptácek studies episodic disorders such as epilepsy and migraine headaches, and he believes that investigating the photic sneeze reflex could shed light on their related neurology.

Epileptic seizures are sometimes triggered by flashing lights and migraine headaches are often accompanied by photophobia. “If we could find a gene that causes photic sneezing, we could study that gene and we might learn something about the visual pathway and some of these other reflex phenomena,” Ptácek says.

But until he and his colleagues find the right families for their study, the photic sneeze reflex will remain something of a genetic novelty act, like the ability to roll your tongue. Although a 1993 paper in the journal Military Medicine raised concerns that light-induced sneezing might endanger fighter pilots, for whom a split second of lost vision could be lethal in certain situations, such fear was largely put to rest when a small study found that wearing sunglasses eliminated the effect.

Beyond that blip of gravitas, papers published about photic sneezing have largely leaned toward the whimsical end of the spectrum. Consider one 1978 publication that took advantage of the then-raging acronym fad and suggested an alternate name for the photic sneeze reflex: Autosomal-dominant Compelling Helio-Ophthalmic Outburst syndrome, or, of course, ACHOO.