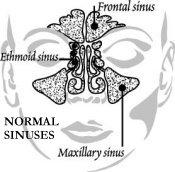 Acute rhinosinusitis is an inflammation and subsequent infection of the normally sterile sinus cavities surrounding the nose. Normally, the sinuses produce a liter of mucous per day to warm, humidify, and filter the air breathed in. When you have a cold or allergy attack, your sinuses become inflamed and are unable to drain. This can lead to stagnation of secretions and infection.