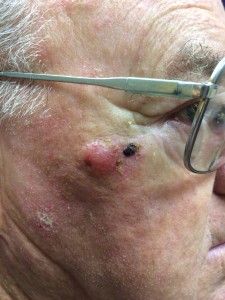 I think of this entity like an aggressive amelonotic melanoma.  If is caused by the Merkel cell polyomavirus (MCV) , discovered at the University of Pittsburgh in 2008, 80% of the time.  It is also known as a cutaneous APUDoma, primary neuroendocrine carcinoma of the skin, primary small cell carcinoma of the skin, and trabecular carcinoma of the skin.  It is a tumor of the tactile merkel cell in the stratum basale of the epidermis.  Histologically it looks like small cell lung cancer with dense cohesive sheets of highly mitotic cells with scant cytoplasm.  They are s-100 positive and are undifferentiated cells of neural crest origin.