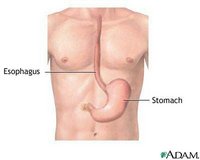 Eosinophilic esophagitis is a disease in which upper intestinal symptoms are associated with dense eosinophilic infiltration of the squamous esophageal epithelium or deeper esophageal tissue; neither symptoms nor eosinophilia respond to the administration of a proton pump inhibitor (PPI). The pathophysiologic mechanisms are likely related to allergic inflammation, not to an underlying motility defect as in gastroesophageal reflux disease (GERD).

Typically allergies affect your upper respiratory tract with itchy watery eyes, sneezing, rhinorrhea. Often they can contribute to lower airway issues such as asthma, cough etc…Secondly they can lead to dermatologic manifestations such as exzema, dermatitis, urticaria, etc…

Eosinophilic Esophagitis seems to be a manifestation of allergic disease on the digestive system. For years the digestive system has been manifesting allergic inflammation in more subtle ways, however this disease is not to be ignored. To cut to the chase the treatment today includes proton pump inhibitors, swallowed fluticasone (without the spacer), swallowed antifungals, intermittent systemic steroids. Comprehensive allergy testing and immunotherapy have proven effective.

Singulair, carafate, and chromolyn may be helpful. Xolair and IL-5 inhibitor are still experimental. Food allergy testing is always completed and elimination diets are considered. A trial of an elemental amino acid diet may be entertained but is rarely practicle. Food drops or shots are still being studied.

In 1993 Attwood et al.7 provided the first comparison between adults with eosinophilic esophagitis and those with peptic esophagitis. The next two reports of similarly affected patients were published in 1994 and 1996 by investigators from Switzerland and Mexico. Straumann et al.8 and Borda et al.9 described a group of males with dysphagia and peripheral eosinophilia with endoscopic features of whitish exudates and esophageal narrowing. In 1995 Vitellas et al.10 described a series of patients with eosinophilic esophagitis, allergic symptoms, and proximal strictures that responded to systemic corticosteroids.

During the next 10 years, eosinophilic esophagitis was more frequently recognized by pediatricians, with pediatric gastroenterologists, allergists, and pathologists recognizing and studying affected children most intensely.3 Kelly et al.11 reported the first pediatric patients in their series of 10 children with persistent GERD symptoms who were found to have 41 esophageal eosinophils/high power field (HPF). Six of the patients had previously underdone Nissen fundoplication for symptoms thought to be secondary to GERD. Following the diagnosis of eosinophilic esophagitis, all patients responded to exclusive use of an amino acid-based formula. The authors suggested that eosinophilic esophagitis is associated with an exaggerated immunologic response to specific food antigens.

The novel treatment modality of topical steroids was first published by Faubion et al.17 in 1998; this treatment reduced the need for systemic steroids. As more emphasis was placed on nutritional management of the disease, Spergel and colleagues18 demonstrated the utility of skin patch and prick testing in identifying food allergens. In recent years, there has been a return of interest in this disease among gastroenterologists who treat adults. Three independent studies documented clinicopathologic findings of 88 adults from Switzerland, North America, and Australia.1, 19, 20 These studies identified strictures, but not cancer, as a long-term complication.

The presence of eosinophilia is common, but not universal, ranging from 30% to 100%.38 In a recent adult series, mild eosinophilia occurred in 50%.13 In another study, 30 children were found to have a median absolute eosinophil count of 582, with a minority having an eosinophil count >800.16

The underlying pathogenesis of eosinophilic esophagitis is likely related to an allergic response. In this light, a number of studies have focused on trying to identify specific allergens in an attempt to remove them from the diet. Early evidence suggested a role for an immunoglobulin E (IgE)-mediated process; in a series of 30 children, 60% of those tested showed either a positive radioallergosorbent test (RAST) or skin prick test.30 The most common food allergens identified in a study of 26 children by using skin prick included milk, eggs, peanuts, shellfish, peas, beef, fish, rye, tomato, and wheat.18 Patients had and average of 2.7 3.3 foods. Recent studies suggest that eosinophilic esophagitis may represent a delayed response, and thus allergy evaluations have turned to skin patch testing. This form of testing has been traditionally used to assess the etiologic agent in contact hypersensitivity responses and suggests benefit in determining foods associated with eosinophilic esophagitis. When compared to skin prick and RAST testing, patch testing was able to identify food allergens in three of 16 patients who were prick and RAST negative.16 Patch testing identified sensitivity to the allergens wheat, corn, beef, milk, soy, rye, egg, chicken, oats, and potato.18 Patients were positive to an average of 2.7 1.8 foods. Definitive evidence that a food is causing eosinophilic esophagitis depends on showing resolution of symptoms, and on biopsy normalization with an elimination diet, as well as return of esophageal eosinophils after the reintroduction of the foods.38 Despite its profound impact on some patients, patch testing is not well standardized, and is not available in many centers, so additional studies are needed before its routine use can be recommended.

While there is no cure for eosinophilic disorders, a multidisciplinary collaboration of experts at Cincinnati Children’s in gastroenterology, pathology, and allergy and immunology, as well as reasearchers, are leading international efforts to find new treatments – and ultimately a cure.

Studies led by Marc E. Rothenberg, MD, PhD, director of the Cincinnati Center for Eosinophilic Disorders (CCED) at Cincinnati Children’s, have shown the rate of eosinophilic esophagitis has risen so dramatically in recent years that it may be more prevalent than other inflammatory gastrointestinal disorders, including Crohn’s disease.

After discovering the first gene associated with eosinophilic esophagitis, eotaxin-3, researchers have been working to find new treatments for eosinophilic esophagitis. Although current therapies appear to be effective, their long-term use is limited by the need for frequent placement of a gastrostomy tube; inconvenience and cost; and local and systemic side effects.

Some of the newer research breakthroughs are showing positive results in two clinical trials.

Testing Anti–IL-5 as a Therapy

The first trial was an open-label phase I/II safety and efficacy study of anti–IL-5 (mepolizumab) in treating patients with eosinophilic esophagitis. This drug was chosen because it blocks IL-5, an eosinophil growth factor. Dr. Rothenberg has shown that this is effective at blocking the disease in animal models.

Researchers at Cincinnati Children’s have recently reported that anti–IL-5 was generally well tolerated. All the patients responded to anti–IL-5 therapy with better clinical outcomes, although to varying degrees. Endoscopic findings improved. And quality-of-life scores improved overall, especially in the areas of physical functioning, social functioning and self-esteem. Some adverse events were observed, including headache and upper respiratory tract infection symptoms, but they were mainly mild.

Since there were marked improvements after the anti–IL-5 therapy, researchers have determined that anti–IL-5 is a promising therapy for eosinophilic esophagitis. Based on these results, the manufacturer of anti-IL-5 is moving ahead with large scale clinical trials.

Fluticasone Propionate as a Potential Therapy

Researchers found that swallowed fluticasone propionate was effective in inducing histologic remission in eosinophilic esophagitis, with a more pronounced effect in non-allergic and younger individuals, and especially in the proximal esophagus. With its ease of administration and favorable side effect profile, researchers concluded that fluticasone propionate is an attractive therapy to treat eosinophilic esophagitis.

Optimal dosing and improved compliance may increase efficacy, and this and other unresolved issues require additional larger clinical trials to refine the therapeutic role of fluticasone propionate in eosinophilic esophagitis. Such trials are now ongoing by the Cincinnati Center for Eosinophilic Disorders.

With eosinophilic esophagitis the esophagus is overwhelmed with white blood cells and as a result, patients of all ages develop symptoms that closely resemble illnesses such as acid reflux disease, food allergies and inflammatory bowel disease.

Eosinophilic esophagitis is diagnosed by a combination of testing, including skin allergy tests, but most importantly, it requires analysis of esophageal tissue specimens obtained by endoscopy.

Common treatment includes a combination of medications and a change in diet. Many patients are so allergic to food that they can no longer eat anything. As a result, they are fed a simple elemental diet through a feeding tube. It is a chronic illness, but with proper management, most patients lead functional lives.

Dr. Rothenberg and his team of physicians and researchers, including Philip E. Putnam, MD, and Margaret H. Collins, MD, both of Cincinnati Children’s, have shown that eosinophilic esophagitis affects one in 2,000 children in the Cincinnati region. Cincinnati Children’s is seeing an increase in cases of eosinophilic esophagitis in many countries, including England, Israel, Japan, Spain, Australia, Switzerland and Italy, and are currently treating 20 international patients.

The Cincinnati Center for Eosinophilic Disorders is a collaboration between the Division of Allergy and Clinical Immunology and the Division of Gastroenterology, Hepatology and Nutrition, as well as researchers.

The assocations between eosinophils and esophagitis and eosinophils and reflux have been previously reported, but Dr. Rothenberg noticed that many children in allergy clinic had gastrointestinal complaints. “When you skin test patients with eosinophilic esophagitis, 80 percent have allergies,” he says, “not only food allergies but also environmental aeroallergens. This suggested that allergies may be a cause for the esophagitis.”

“One of the things that struck me,” adds Dr. Rothenberg, “is that we know that people who develop reflux often have asthma. There seems to be some link between the two. In fact, when those with asthma are treated for reflux they sometimes get better.

Based on this clinical observation, and with the hunch that there was likely to be an association between the development of allergy and esophagitis, our research group subsequently developed the mouse model to prove it.”

The results, which shed new light on a possible cause of esophagitis, suggest that therapy should be directed at controlling allergies and preventing exposure to environmental allergens.