Omalizumab (trade name Xolair, Roche/Genentech and Novartis) is a humanized antibody originally designed to reduce sensitivity to inhaled or ingested allergens, especially in the control of moderate to severe allergic asthma, which does not respond to high doses of corticosteroids. It has been approved for treating adult and adolescent patients 12 years and older with severe or moderate to severe allergic asthma in more than 90 countries, since its first of such approval in 2002 in Australia. Omalizumab was approved in March 2014 in the European Union and the U.S.A. and in about 10 other countries for treating patients 12 years and above with chronic spontaneous urticaria (CSU) (also referred to as chronic idiopathic urticaria or CIU), which cannot be treated with H1-antihistamines. CSU is not an allergic disease. Presently, the drug is being actively studied in clinical trials for various allergic diseases and some non-allergic diseases, especially skin diseases.

Omalizumab is a recombinant DNA-derived humanized IgG1k monoclonal antibody that specifically binds to free human immunoglobulin E (IgE) in the blood and interstitial fluid and to membrane-bound form of IgE (mIgE) on the surface of mIgE-expressing B lymphocytes.  Unlike an ordinary anti-IgE antibody, it does not bind to IgE that is already bound by the high affinity IgE receptor (FcεRI) on the surface of mast cells, basophils, and antigen-presenting dendritic cells.

IgE is commonly involved in type I hypersensitivity, which manifests the most prevalent allergic diseases. It has been estimated that as high as 20 to 40% of the populations who live a western lifestyle in economically advanced countries are affected by allergy and seek medical help.  In the U.S., 8% of adults and 10% of children have asthma.  Allergy occurs more frequently in individuals with higher serum IgE levels, though some allergic individuals have very low serum IgE, and some people with very high IgE have no allergic problems. 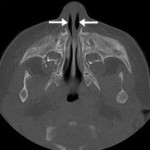