Langerhans cell histiocytosis (LCH) is a group of idiopathic disorders characterized by the presence of cells with characteristics similar to bone marrow-derived Langerhans cells juxtaposed against a backdrop of hematopoietic cells, including T-cells, macrophages, and eosinophils. 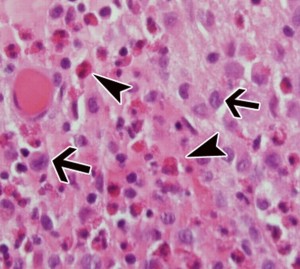 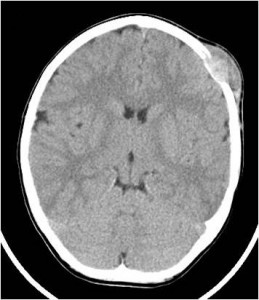 LCH encompasses a number of diseases. On one end, the clinical spectrum includes an acute, fulminant, disseminated disease called Letterer-Siwe disease, and, on the other end, solitary or few, indolent and chronic lesions of bone or other organs called Eosinophilic granulomas. The intermediate clinical form called Hand-Schüller-Christian disease is characterized by multifocal, chronic involvement and classically presents as the triad of diabetes insipidus, proptosis, and lytic bone lesions.

Histologically, the lesions typically appear granulomatous, with a reactive background of macrophages, eosinophils, multinucleated giant cells, and T-cells, the key to diagnosis is to identify the pathologic Langerhans cells (ARROWS in left picture).  These are large, ovoid, mononuclear cells that are 15-25 µm in diameter, with a folded nucleus, a discrete nucleolus, and a moderate amount of slightly eosinophilic homogeneous cytoplasm. When the indentation of the nucleus affects its center, it acquires a reniform pattern; however, if it is peripheral, the nucleus has a coffee-bean shape.

Special studies are useful for definitive identification of normal and pathologic Langerhans cells. The Birbeck granule (RIGHT) is their distinctive ultrastructural hallmark. It consists of an intracytoplasmic membranous body that is 33 nm wide and 190-360 nm long, possessing a short, rodlike shape with a dotted line down the midline of the space between the membranes (resembling a zipper) and a terminal expansion in the form of a vesicle, giving a racquet appearance.