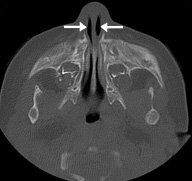 Pyriform aperture stenosis (PAS) is a very rare congenital anomaly where the anterior opening of the nose is narrow secondary to overgrowth of the maxillary bone. PAS is sometimes associated with other abnormalities, including the presence of a single central incisor tooth and pituitary abnormalities.
What are the causes of pyriform aperture stenosis?
Pyriform aperture stenosis is present at birth and can be associated with other abnormalities. There is no known specific cause.
What are the symptoms of pyriform aperture stenosis?  It does not seemed to be linked to a lot of other congenital anomalies.
Children with mild PAS will often be noisy but able to maintain their airway and feed appropriately. Children with severe PAS will often have significant distress, necessitating airway support (oropharyngeal airway) and occasionally intubation. Symptoms include:
Cyclic respiratory distress relieved with crying
Noisy breathing
Feeding difficulties
Inability to pass a suction or scope into the anterior nasal passage (PAS)
Nasal drainage

The child must be monitored to some extent.  Saline lavage, suctioning, and possibly supplemental oxygen are considered.
How is pyriform aperture stenosis diagnosed?
CT scan demonstrating pyriform aperture stenosis.
Patients with PAS often present shortly after birth with difficulty moving air through their nose. Since infants breathe only through their nose until they are about 4 months old, they are unable to compensate by breathing through their mouths. The degree of respiratory distress depends on the degree of nasal narrowing. Feeding and weight gain are often impaired as well. Further evaluation is done with endoscopy and CT scans.

I scope the child.  The pediatric scope is approximately 8 french.  A 5 french feeding tube may be used to rule out an atretic lesion.
Infants with PAS need to be evaluated for both airway and feeding issues. Management of the airway often requires a combination of supportive, medical and surgical care. Feeding and swallowing issues are very common in children with these conditions and often need to be addressed by speech pathologists and GI specialists. Children born with syndromes often need other subspecialty evaluations (cardiology, ophthalmology, etc.) and benefit from the coordinated care provided in the multidisciplinary-setting of the Center for Pediatric Airway Disorders.

How is pyriform aperture stenosis treated?
Treatment depends on the severity of the anomaly (unilateral or bilateral), how much it affects the child’s breathing and eating as well as what other medical conditions the patient has.

Treatment for mild cases
These include PAS cases where the child is not having respiratory distress or significant feeding issues. These patients may initially be managed with close observation and occasionally supplemental oxygen. Use of nasal saline to keep the nasal linings healthy and free of discharge is often indicated. Avoid instrumenting the airways as any degree of congestion will be problematic. Creating more inflammation of the mucous membranes can be disastrous. Often I will use steroid drops (Ciprodex otic or Dexamethasone ophthalmic 2-3 drops each nostril tid tapering over 6 weeks).  Most often patients with mild PAS will improve over time with the growth of the airway.  Besides saline, and steroid drops, I am liberal with topical decongestant drops (oxymetozaline), and bactroban ointment.

Treatment for severe cases
Infants with severe PAS should have surgery as soon as they are stable and have been evaluated for other anomalies. The major goal of the surgical repair is to open the nasal airway sufficiently, allowing the infant to breathe through her nose without difficulty. There are several approaches available to accomplish this goal.

Surgical management of PAS is often performed using a sublabial approach, where an incision is made inside the upper lip where it meets the gums to access the bony openings into the nose. The encroaching bone is then removed using a curette or drill. Temporary stents are often necessary in order to maintain the repair site for a few weeks as the area heals. Once the openings are enlarged, the infant’s breathing and feeding problems are resolved.
Further follow-up is only necessary if the child redevelops PAS symptoms.