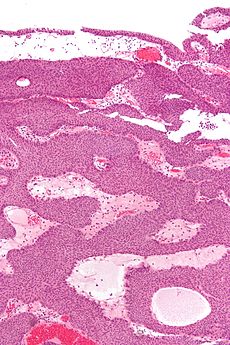 An inverted papilloma is a type of tumor in which surface epithelial cells grow downward into the underlying supportive tissue. It may occur in the nose and/or sinuses or in the urinary tract (bladder, renal pelvis, ureter, urethra). When it occurs in the nose or sinuses, it may cause symptoms similar to those caused by sinusitis, such as nasal congestion.

In 1854, Ward first described schneiderian papillomas (SPs) of the nose (ie, sinonasal papilloma).[1] These benign lesions were named in honor of C. Victor Schneider who, in the 1600s, demonstrated that nasal mucosa produces catarrh and not CSF and identified its origin from the ectoderm. Kramer and Som classified SPs as true nasal neoplasms and described them as true papillomas, distinguishing them from inflammatory nasal polyps.[2] Ringertz was the first to identify the tendency of SPs to invert into the underlying connective tissue stroma, which differs from other types of papillomas.[3]

Allergy as a cause has been largely discredited because patients with SPs often have histories negative for allergies. In addition, sinonasal papillomas are typically unilateral.

Paranasal sinusitis is a frequent finding in patients with SPs and is considered by many authors to occur as a result of a tumor obstructing the sinuses rather than an inciting event creating the tumor.

Extrinsic factors associated with air pollution and industrial carcinogens have been considered as possible causes of SPs; however, more studies are required to achieve statistical significance.[4]

Viruses have long been suspected to cause these neoplastic lesions because they have a well-known tendency to produce papillomas elsewhere in the body. Human papilloma virus (HPV) is an epitheliotropic virus that has been implicated in premalignant and malignant lesions of the anogenital tract. Similarly, both the low-risk subtypes (ie, HPV 11, HPV 6) and the high-risk subtypes (ie, HPV 16, HPV 18) have been identified in SPs. Kusiak and Hudson described the presence of intracytoplasmic and intranuclear inclusion bodies in SPs. In 1987, Respler et al, using an in situ hybridization technique, demonstrated HPV 11 in 2 of their patients.[5]

Weber et al confirmed these findings in a study of 21 patients using in situ DNA hybridization, and 16 patients were found to have HPV DNA.[6] In addition, all recurrent lesions in their series were positive for HPV DNA. They theorized that the presence of HPV might affect the biological behavior of SPs. On the other hand, some studies using the hybridization technique and polymerase chain reaction have shown that HPV 6 and HPV 11 are involved in most cases of fungiform SP but are only rarely involved in cases of cylindrical and inverted papillomas.

Clinical behavior
Sinonasal SPs are almost always unilateral. The 3 main clinical characteristic attributes of the tumors are (1) the tendency to recur, (2) their destructive capacity to surrounding structures, and (3) their propensity to be associated with malignancy.

Squamous cell carcinoma is the most common malignant neoplasm associated with SPs. Other types of malignancy rarely associated with SPs are adenocarcinoma and small cell carcinoma. Of the 3 subtypes of SPs, fungiform papillomas have not been reported to have malignant potential. Conversely, inverted papillomas have been reported to develop into carcinoma in 5-10% of cases. Cylindrical papillomas appear to have a higher frequency (14-19%) of malignancy association. No correlation is evident between the number of recurrences or the interval between the recurrence and the development of malignancy.[8]

Unilateral nasal obstruction is considered the most common presenting symptom of patients with SP. Other symptoms may include epistaxis, nasal discharge, epiphora, and facial pain.

Physical examination usually reveals a unilateral polypoidal mass filling the nasal cavity and causing nasal obstruction. SPs have an irregular, friable appearance, and they often bleed when touched. They are reddish gray and may completely fill the nasal cavity, extending from the vestibule to the nasopharynx. The nasal septum is often bowed to the contralateral side. Proptosis and facial swelling sometimes develop secondary to expansion of the papillomatous lesion.