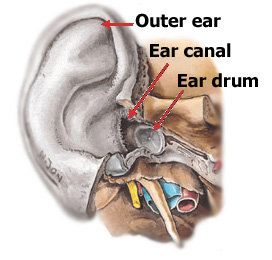 What is the external ear?

The outer or external ear really is everything outside of the ear drum. It consists of the outside of the ear drum, the ear canal, and the visible ear (auricle). Problems range from ear piercing complications to canal infections. The skin of the external ear is unique in that it lies directly on the bone and cartilage. This makes it exquisitely sensitive to injury, infection, and temperature extremes. Ear pain, even deep seated, is often a result of inflammation of the external ear.

Earwax is healthy in normal amounts and serves to coat the skin of the ear canal where it acts as a temporary water repellent. It also creates a poor environment for bacteria and fungi to grow. The absence of earwax may result in dry, itchy ears. Most of the time the ear canals are self-cleaning; that is, there is a slow and orderly migration of ear canal skin from the eardrum to the ear opening. Old earwax is constantly being transported from the ear canal to the ear opening where it usually dries, flakes, and falls out. Under ideal circumstances, you should never have to clean your ear canals. However, we all know that this isn’t always so. If you want to clean your ears, you can wash the external ear with a cloth over a finger, but do not insert anything into the ear canal. Most cases of ear wax blockage respond to home treatments used to soften wax if there is no hole in the eardrum. Patients can try placing a few drops of mineral oil, baby oil, glycerin, or commercial drops, such as Debrox®, or Murine® Ear Drops in the ear. These remedies are not as strong as the prescription wax softeners but are effective for many patients. Occasionally, an otolaryngologist (ENT specialist) may need to remove the wax using microscopic visualization.

What Is “Swimmer’s Ear”?

“Swimmer’s ear” is one of a number of names for infection of the outer ear canal. It is also called “fungus” of the ear or “jungle ear” (so named by soldiers who suffered it fighting in the South Pacific). Sometimes a fungus really causes it, but more often, especially in painful cases, it is caused by one of nature’s common bacteria. Physicians refer to it as “External Otitis”. There can be varying degrees of this condition and it is a leading cause of ear pain. Hearing aids can be a cause of this as they trap moisture in the canal and create some trauma on their own.
How Do You Avoid It?

External otitis can be prevented if you use antiseptic eardrops whenever you feel that water is trapped in your ears. Such ear drops are inexpensive and are sold without prescription under various trade names such as Aqua Ear, Ear Magic, Swim Ear, etc. If your ear doctor says you have normal eardrums, and if he says it is safe, you could make up your own ear drops to use after swimming. Many doctors recommend rubbing alcohol as an important ingredient. It absorbs the water, helps dry out the ear, and may even kill the bacteria and funguses that cause swimmer’s ear. Another effective ingredient is white vinegar, which you could mix half and half with the alcohol, (Vinegar contains acetic acid, which kills the bacteria and fungus.) Your druggist can supply you with a dropper bottle for your alcohol or alcohol vinegar mix eardrops so you can keep them in your beach bag.

Why Do Ears Itch?

An itchy ear is a maddening symptom. Sometimes it comes from a fungus (especially in acute cases), but more often it is a chronic dermatitis (skin inflammation) of the ear canal. One type is seborrheic dermatitis, a condition similar to dandruff in the scalp; the wax is dry, flaky, and abundant. Some patients with this problem will do well to decrease their intake of foods that aggravate it, such as greasy foods, carbohydrates (sugar and starches), and chocolate. We will often prescribe a cortisone containing cream and a steroid eardrop to use at bedtime or whenever the ears itch. We will have you apply the cream regularly with a Q-tip or your little finger. There is no long-term cure, but it can easily be kept under control. Itchy ears in a few patients are caused by allergies that may require specific treatment. Patients with itchy, flaky ears or ears that accumulate wax are very likely to develop “swimmer’s ear.” They should be especially conscientious about using the alcohol or antibiotic-steroid ear drops as described above whenever water gets trapped into the ears. They also do well to get their ears cleaned out each year before the swimming season starts.

The external ear is extremely sensitive and is the leading cause of ear pain. Most external ear problems are handled with cleaning and topical medications. You cannot overdue ear drops or steroid creams. Ear drops can be prescription with antibiotics and steroids, or over the counter. Many otitis prone people simply continue indefinitely to use them a couple of nights per week. I will often have my hearing aid patients do this regularly. A typical regimen would be to take your hearing aids out, lie on your side and fill the upward ear canal with the drops. You then simply let them drain out. After that some patients have been helped by holding a hair dryer (with the heat turned off) about 15-20 inches away from your head and literally dry out the ear canal. Allergy testing should certainly be considered as well as allergy patients often struggle with skin conditions. Preventative care is certainly the name of the game with this problem.