A branchial cleft cyst is a congenital epithelial cyst that arises on the lateral part of the neck due to failure of obliteration of the second branchial cleft (or failure of fusion of the second and third branchial arches) in embryonic development.
The cyst wall is composed of either squamous or columnar cells with lymphoid infiltrate, often with prominent germinal centers. The cyst may contain granular and keratinaceous cellular debris. Cholesterol crystals may be found in the fluid extracted from a branchial cyst.  If the cyst connects to the either the skin on the outside or mucous membrane on the inside it is called a sinus.  If it connects to both it is called a fistula.

Pathophysiology
Branchial cleft cysts are remnants of embryonic development and result from a failure of obliteration of one of the branchial clefts, which in fish develop into gills.

Types
First branchial cleft fistulae typically originate in the angle of the mandible and extend to the external auditory canal. They are often associated with the facial nerve. Rare ~5%.

Second branchial cleft fistulae are most common (~95%). They are found along the anterior border of the Sternocleidomastoid muscle, pass through the carotid bifurcation and into the tonsillar pillar.

Third and fourth branchial cleft fistulae are rare. The external opening occurs about 2/3 of the way down the SCM anteriorly, similar to second branchial cleft cysts. The tract ascends along the carotid sheath posteriorly to the internal carotid artery, under the glossopharyngeal nerve, and over the vagus nerve and hypoglossal nerve to open into the piriform sinus.

Symptoms
Most branchial cleft fistulae are asymptomatic, but they may become infected. The cyst, however, usually presents as a smooth, slowly enlarging lateral neck mass that may increase in size after an upper respiratory tract infection. 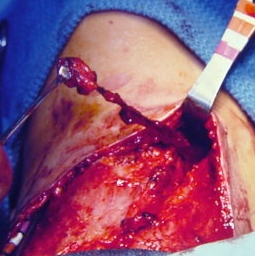 Bilateral branchial cleft sinuses during surgery. Conservative (i.e. no treatment), or surgical excision. As complete surgical excision may be difficult (due to the close proximity of the internal jugular vein and carotid vessels that lie deep to the swelling), they can recur.